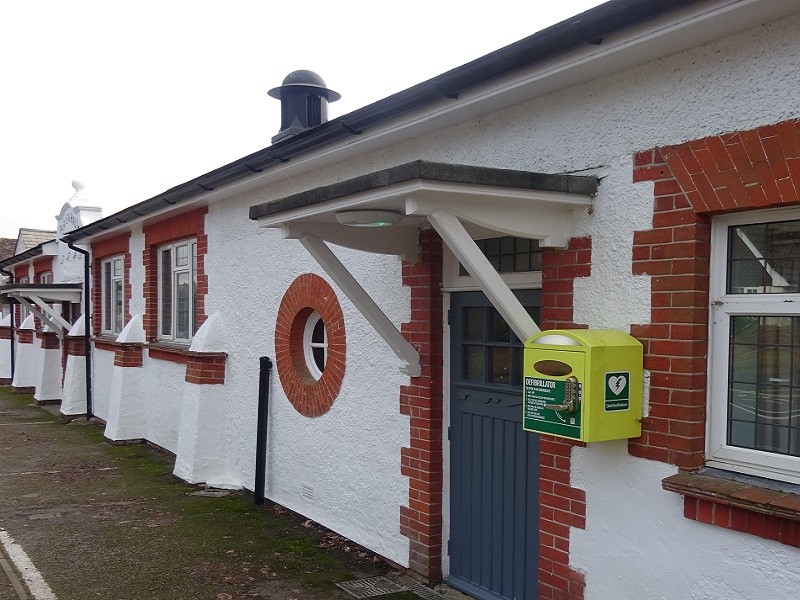 One of the reasons that residents of Rowlands Castle love living here, is the community spirit. There are many clubs, societies, groups and activities available for all ages. Please visit the Community pages for more details of those activities. On this page we show the Parish Hall, which is the community venue for many of these activities.

The Large Hall has a stage and dressing-rooms, Small Hall and kitchen, as well as dedicated meetings rooms. The Garden is available for summer barbecues. The Parish Hall has Public Entertainments and Theatre Licences.

Thanks to generous donations from the Village Fair Committee, the RCA, RC Good Neighbours and Parish residents, two defibrillators were placed within the Parish. They are installed on the external walls of the Parish Hall (as shown above) and Rowlands Home Hardware. Both agreed to absorb the cost of the power needed to keep them in good condition.

The interesting history of the Parish Hall is detailed below, thanks to research undertaken by village resident and historian, Paul Marshman. Information on how to hire the hall can be found on the RCA website. 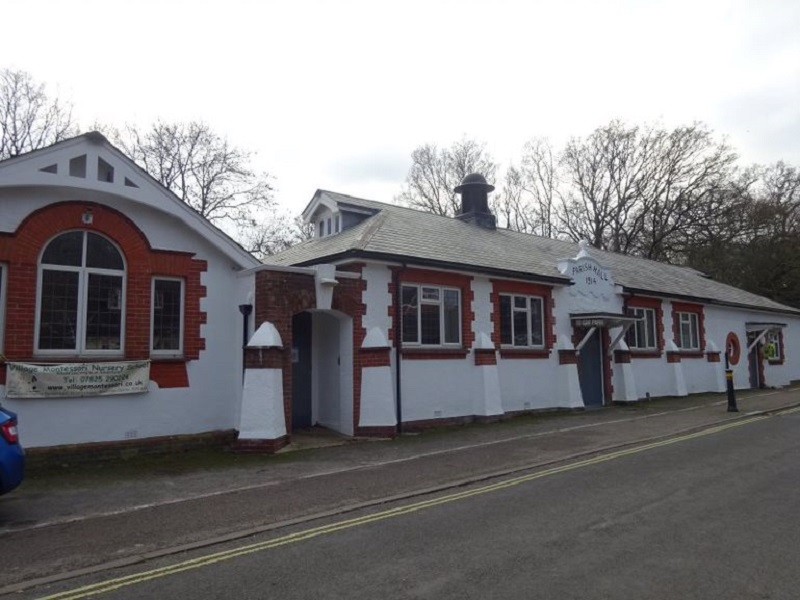 The inscription above the main entrance to the Parish Hall reads ‘1914’ which was, as you expect, when it was built or opened. However, that part known as the Small Hall is somewhat older. Records show that it was built in 1899 as the Institute of Science, Technology and Art, doubling also as a meeting room, allegedly to replace an old railway carriage.

As far back as 1897, the Idsworth Parish Council wanted to take control of classes for Poultry Keeping and Woodwork for men, and Cookery and Nursing for women. As early as 1810, Mechanical Institutes, also called Halls of Science, were established in the north of England as a means of self-improvement for adults. This was a result of the fact that the working population of largely uneducated adults could not perform the simple mechanical tasks required by the industrial revolution.

Frank Stubbington, Edward Bastin, Francis Rook and George Rayment were instigators of the plan for the Institute and were its trustees. The site was leased from the Clarke-Jervoise (Idsworth) estate at 18 shillings (90p) a year. The plot was 30ft x 40ft when the building is shown on maps of 1911. But in 1911 the plot was increased to 100ft X 116ft.

There is no record in the minutes of the Idsworth Parish Council about the reasons for building the new hall but work began in October 1913 and was completed by April 1914. The builders were Rogers Brothers, to a design by Vernon Inkpen, and cost £900 raised by public subscription. The ground rent was 5 shillings (25p) a year for 5 years before rising to £2.10s.

The 1913 subscription list is on display in the foyer and states it is the Parish Hall for Idsworth and North Havant.  However, the records of North Havant Parish Council show that they met independently in the Reading Room at Durrants until they merged with Idsworth in 1932/3 to form the Parish of Rowlands Castle. In 1919 the trustees, Admiral O’Callaghan, Sir Frederick Fitzwygram and Colonel Frank Stubbington paid £65 for the freehold.

In 1920, the Parish Council paid 10 shillings (50p) for the yearly hire of the hall which was for only 6 meetings. In the same year, a shed was built at the rear of the hall, against the firing range, for the storing of fire appliances.

In February 1924, a public meeting was held to discuss a recreation ground, and a Playing Field Committee was set up. The first mention of a cultural activity was in 1925 when the Rowlands Castle Players presented A Midsummer Night’s Dream. This group continued until 1934 or so but it appears to be the only time they or any of their successors attempted Shakespeare.

The Vestry and Parochial Church Council held a meeting in January 1926 to discuss the building of a church hall. This was the vestry of St Johns at Redhill so you would have thought such a meeting should have been held in the school or the reading room at Durrants, but the Parish Hall was used. The church hall itself was finished in November that year and their future meetings were held there. Annual Parish Meetings and the Parish Council AGM are now held in the Hall.

The Hall was used as a tea-room by the Cricket Club for many years, until the new pavilion of 1976, and as a dressing room for the football team in that one year also. Teas were and still are a popular part of the summer game, and it is perhaps a unique event that in the 1960s teas at Rowlands Castle were provided by two schoolboys.

Every summer, since anyone can remember, the Parish Hall plays host to the Brownies, five or six packs a year come and “camp” there, taking walks in the area and using the recreation ground. Meetings, both regular and open, are a feature of the Hall’s activities. The Rowlands Castle Association (RCA) first met in 1972, and in 1975, villagers were asked if they wanted to form a tennis club. Good Companions and the Playgroup were regulars as later were the WRVS Luncheon Club and the Camera Club.

In 1974 the Hall first began to show its age, for despite a management report suggesting it was used almost to capacity, rising maintenance and running costs were causing concern. Another management committee was formed, and a structural survey found problems, including a leaning wall. By 1975 more improvements were thought necessary, such as new kitchen, extra storerooms and new toilets, but there was no money. A buy-a-brick scheme was launched in 1980 to aid fund-raising. The work was completed, and the hall was re-opened on July 4th, 1981. The cost was £15,000, which included £200 from the trustees, £2,000 parish council grant, £1000 from EHDC and the rest by fund raising to cover the bank loan

A plan for a major extension or an enlargement of the main hall was put forward in 1988. The hall had been successful in obtaining a Public Entertainment License and a Theatre Licence, so a larger space was desirable.  A new buy-a-brick (name-a-brick) scheme was started and this raised some £2,000 towards the estimated cost of £60,000 (boards showing the name-a-brickers are still on display, but strangely no mention anywhere of the 1980 scheme).

This major extension involved the incorporation of the old rifle range-cum-storerooms into the body of the main hall and the new corridor and offices beyond. Optimistic reports suggest the hall was used more than ever. The new hall was opened on 4th October 1990 but by then had cost £72,000 There was still little or no heating.

The hall was invaded by damp in 1997, the claim being it had sunk 15″ since 1914 and the damp proof course was below ground level, something photographs did not support, unless the problem was at the golf club end.  The following year indeed the changing rooms were improved, along with the kitchen which had to be brought up to Health and Safety standards. The cost of these latest improvements was over £40,000 but that included the raising of the roof level at the stage, the new room above and more storage space. However, the room above, supposedly a meeting room, could not be used as there was no fire escape and, at last, central heating was extended to all areas.

A concerned villager living opposite, came up with the Hall Saver Scheme. Based on the National Lottery Bonus Ball, it raised £25 a week and then £50 a week when a second scheme was launched. The hall was not being fully utilised, despite the Committee making great efforts to attract outside acts and entertainment. By 2006. the lottery scheme had raised £2,400, the Parish Council made a donation of £2,600 from the rates and they agreed to pay more for their office space.

In 2006, the cupola was found to be heavily corroded and plans were made to remove it completely (it was part of the original ventilation system), however good sense prevailed, and it was replaced by a locally made replica.

The Management Committee and the Parish Council had a period of disagreement from 2007 onwards and an extra group, a working party, was set up. Whatever the ins and outs, improvements continued. Structural problems were discovered in 2009; the east wall was thought to be moving. The whole hall had to be redecorated but the dispute did mean that the Parish Council vacated its office in 2011, maybe because of the rent increases from £2,548 in 2009 to £3,632 in 2011. The new Management Committee took over the office space itself. In 2010, the Hall was operating at a profit again.

Editorial: The extracts above are taken from the booklet written by Paul Marshman entitled ‘Rowlands Castle Parish Hall 1914-2014’