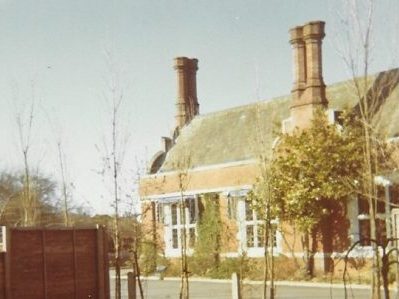 Two local historians have written articles on the history of Stansted College. The first is a short summary by Mary-Jane Lomer taken from her booklet Round and About Rowlands Castle, while the second paper outlines the history of the college in more detail and has been written by Jennie Dolman, a member of the Rowlands Castle Historical Society. The page concludes with some pictures and scans of the college. 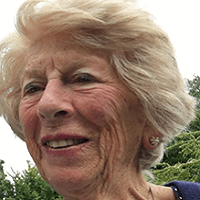 A history of Stansted College by Mary-Jane Lomer

In 1850 Stansted College, a building in the Elizabethan style of architecture at the bottom of Red hill Road, had its first stone laid by its benefactor Charles Dixon Esq. of Stansted House and previously a merchant of London.

The inscription read that it was for “Six of his less fortunate brethren.” Opened for the reception of inmates on 1st May 1852, the six less successful gentlemen were above the age of so and not currently having an income of more than 5320 per annum, were of good character, Protestants and being widowers or bachelors.

Dixon endowed the building with £20,000 in public funds and a Trust was formed. The college closed its doors to the old inmates at the end of the t950’s. The last resident was a Mr Hind marsh and his caretaker, Mr Aylesbury who many people still remember as a little white-haired old man. He used to lean on the wall outside and chat to passers-by. Some he invited inside and people mentioned hearing the sound of running water under the building and the beauty of the wooden panelling. One young man remembers being told to be quiet when passing the College on the way to Redhill School because of the old men who lived there.

Stansted College was refurbished in late 1960s and became the Stansted Country Club.  This was demolished and replaced in 1971 with a small development of houses, Stansted Close.

“This article is taken from the booklet written by Mary Jane Lomer entitled ‘Round and About Rowlands Castle’ 2015, for which she retains the copyright.” 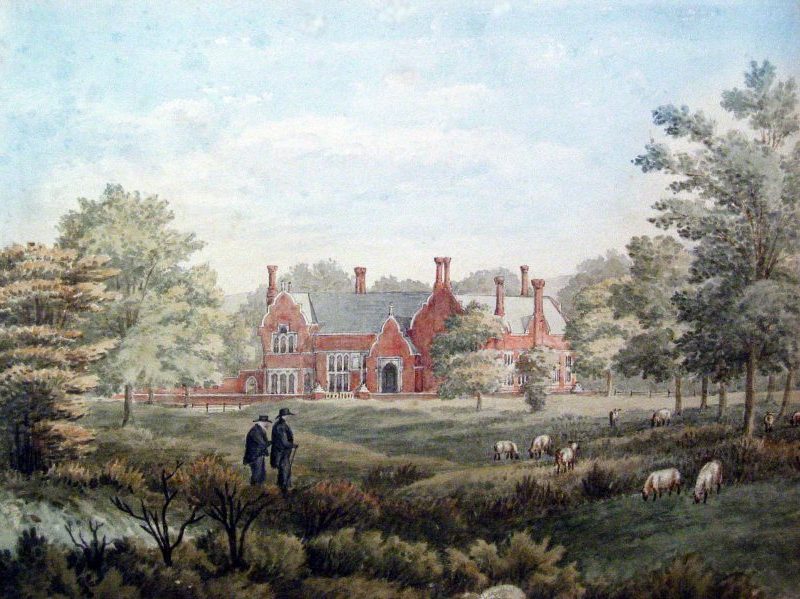 A history of Stansted College by Jennie Dolman

Stansted College (early 1850s to late 1930s, demolished 1971) was built in Redhill Road by the owner of Stansted Park, Charles Dixon, as an almshouse for six ‘decayed merchants’. The street names Stansted Close and College Close are all that remain now.

Mr Dixon was reputedly a millionaire, certainly very wealthy and widely known for practical philanthropy. He had been a port wine merchant and the family may also have been in the cotton trade. Stansted College, in which he took a personal interest, was for worthy merchants from London, Liverpool or Bristol who had fallen on hard times. (The idea may have come from a home for ‘decayed’ mariners in London. London was where his business was based, Liverpool was the ‘second city’ of the Empire (Disraeli) and Bristol was a major port with links to the wine trade.) At the same time as Mr Dixon was overseeing the foundation of Stansted College he was also building Christchurch at Forestside and its associated school.

He laid the foundation stone on 24 April 1850 in his 80th year. ‘Thankful for divine mercies, Charles Dixon, Esq. of Stansted, late a merchant of London, erected and endowed this building for the benefit of his less fortunate brethren.

Fig 1 Stansted College – founded by the late Charles Dixon, Esq., and opened, for the reception, benefit and comfort of six of his less fortunate brethren in trade, being merchants of London, Liverpool and Bristol, on 1st May 1852.’  from a painting by CR Cotton 1860s.

We have an early description from Charles R Cotton who was among the first Fellows as the residents were called. He was a prolific amateur water colourist and keen observer of the area. He said of his new home ‘If contentment be your lot and happiness your aim And from the bustle of the world a life of peace to claim, Within these walls with thankfulness and gratitude admit That every comfort for remaining years is here made fit.’

He says of Stansted College ‘On the right hand side of the road coming from Red Hill and just upon the entrance into the Village stands the College a neat Elizabethan structure of red brick of and caen-stone dressings. It is situated in enclosed grounds of about 5 acres, a lawn leading to a small copse of oak on one side, or rather front, while in the rear or opposite side is the kitchen garden. The wood or coppice is intercepted by gravel walks which extend round the back of the building. ‘

It was founded … for six of Mr Dixon’s less successful brethren, ….. being at the time of admission and remaining afterwards widowers or bachelors being above sixty years of age, not having an income exceeding £20 a year, Gentlemen of good character and of the Established Church.

Each member has a room to himself (beside the use of the common hall) looking out upon the lawn, of good dimensions lofty and well furnished: the bed is in the same room in a recess opposite the window with red merino curtains drawn in front and the lavatory or dressing closet is in one corner shut in by a baized door, so that in the daytime it has no appearance of anything like a bed-room.’

‘Mr Dixon endowed the college with £20,000 pounds stock producing annually £625. Out of this sum, £20 a year is to be paid to the Incumbent of the Red-Hill Church as Chaplain to the College, a like sum to a surgeon, £25 a year each to two female servants, a cook and housemaid and gardener, who cleans the boots and knives. A nurse is always provided in case of illness paid out of the general fund, £30 is also allowed for coals. The members of the College have £52 pounds a year allowed them and interest on the accumulated funds above £500 divided among them once a year.

The trustees mentioned in Mr Dixon’s will are the proprietor of Stansted in perpetuity, the Chaplain and the Governor of the Bank of England, for the time being Henry Norman, Esqre, 42 Lothbury, and Sir Jervoise Jervoise.’

The endowments mentioned seem accurate. A Hampshire newspaper account [Jan 5 1856] after Mr Dixon’s death refers to £40 a year for each person and £1 a month towards his dinner making up the £52. ‘There are also allowed the sums of £30 per annum for coals, £20 per annum for medical attendance and £20 per annum for the services of a clergyman.’

Trustees. There is no indication if these were varied. The Governor of the Bank of England would have known Charles Dixon through business. The proprietors of Stansted Park after Mr Dixon’s death in 1855 were his widow Augustina, then George Wilder, her son by her first marriage and his descendants, Maj Cecil Whittaker from about 1914 and the Earls of Bessborough from about 1924. The Chaplain may have been from Red Hill (i.e. St John’s) or from the new parish of Forestside and Stansted which Charles Dixon was instrumental in founding and where he was building the church. Sir Jervoise Jervoise owned Idsworth House.

The only indications of links between Stansted Park, Christchurch Forestside and the College are that some early members were buried at Forestside and in the 1930s Forestside’s vicar is taking communion to the sick.

In her book ‘Round and about Rowlands Castle’ Mary Jane Lomer (copyright retained) writes ‘The college closed its doors to the old inmates at the end of the 1950’s. The last resident was a Mr Hindmarsh and his caretaker, Mr Aylesbury who many people still remember as a little white-haired old man. He used to lean on the wall outside and chat to passers-by. Some he invited inside and people mentioned hearing the sound of running water under the building and the beauty of the wooden panelling. One young man remembers being told to be quiet when passing the College on the way to Redhill School because of the old men who lived there.’

Editorial: Click to scroll through all the images and enlarge them. December 2020