Sperry Rail is the world leader in infrastructure monitoring systems for railway networks.

Editorial: Sperry Rail had offices in the village from early 2004 until the end of 2006 when they out grew the office space and moved to a larger industrial unit on Martin Road in Havant. The following article first appeared in the RCA magazine in the 2005 summer edition. Sperry’s technology has improved a great deal in the intervening period though the concept of inspecting railway track from high speed trains is at the heart of Sperry’s business and every night inspection trains are still running over the Network Rail infrastructure and even more countries around the world.

The US division, Sperry Rail, has its head office in Danbury, Connecticut with more than one hundred employees working all over the US, Mexico and Canada. 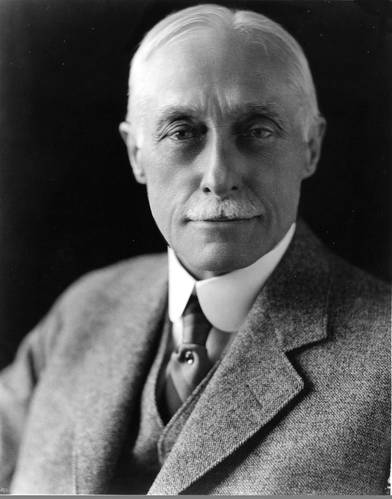 Sperry Rail was established in 1928 by Elmer Sperry who was the second biggest inventor in the USA after Edison. Elmer’s other inventions included the world’s first gyrocompass and ship gyro stabiliser. Elmer was responsible for starting some of the largest companies known in the world today; however, Sperry Rail is now the only original company that still holds the Sperry name.

Earlier in the year you may have seen two bright yellow trucks with an assortment of mechanical and electronic systems mounted on the back, parked outside the office. These vehicles, known as Hi Rail trucks, are a cross between a road and railway vehicle and are part of Sperry Rail’s fleet of test vehicles. They can be driven on the road but can also travel on railway line by lowering a set of railway wheels at the front and rear. They are powered on the railway track by the road wheels, the railway wheels guide the Hi Rail trucks on the track. Here is an example of the Sperry UTU5 Hi Rail vehicle in operation.

Britain has 20,000 kilometres of railway track and Sperry Rail operates a fleet of three trains and two Hi Rail trucks that work continuously, mostly at night, to inspect the nation’s railways looking for potential problems in the railway track so that together with Network Rail, Sperry Rail can keep Britain’s railways safe allowing passenger trains to run at their operating speed and keep to their timetables. 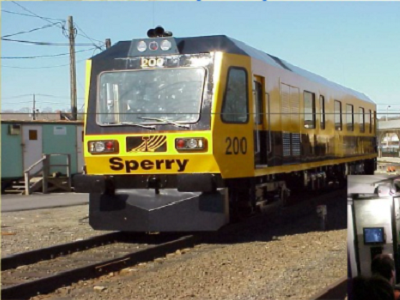 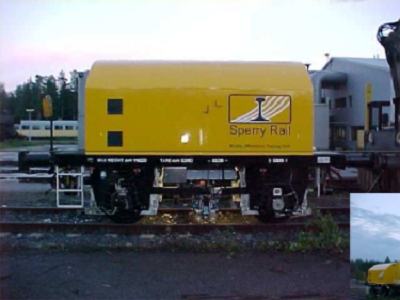 In Europe Sperry have different types of vehicle, the self powered inspection coach SRS 200 shown working near Leipzig, Germany and the SRS 240 shown working in Finland.

Why is the track inspected?

Railway rail is subjected to complex stress patterns throughout its working life. As train wheels pass along it, they introduce stresses of varying degrees dependent on the weight of the axle. In addition, there are many mechanical features such as insulated rail joints, points, crossings and signalling attachments that affect the rail. These factors, combined with environmental effects of temperature, water, ice and a wide range of contaminant fluids, lead to a situation in which a variety of defects can initiate and grow whilst the rail is in service. Any track failures will cause delays as the speed of the trains is reduced over the damaged section and in the worst case damaged track can cause derailment of the trains.

The tracks are inspected regularly throughout the year; the frequency of inspection depends upon the number and weight of the trains on a particular line. The West Coast main line, Britain’s most heavily used stretch of track is inspected every eight weeks; a branch line in Cornwall may be inspected twice a year.

How do the inspection vehicles work?

Sperry Rail uses ultrasound to inspect the railway track. You are probably all familiar with ultrasound in medical applications and the images that it creates. Sperry Rail uses the same technique to inspect railway tracks. A burst of sound is transmitted into the rail and the echoes are analysed and displayed to give an image of the rail. If the image is clear, then there are no defects in the rail.

There are nine separate ultrasonic transducers, all mounted at different angles, within a liquid filled tyre, known as a Sperry Roller Search Unit. Ultrasound generated by these transducers passes through the liquid in the tyre, through the tyre wall and into the rail, as shown diagrammatically. Rail is split into three areas, the head which is the running surface, the web and the foot. This technique inspects all of the rail head while at the same time allowing for the inspection of web, bolt holes and the rail base in the web area.

Measurements are made on the track every few millimetres. Hi Rail trucks are limited to inspection speeds of about 20 mph, whereas the trains can inspect at speeds of up to 50 mph. One of the trains, UTU3 is a rake of three coaches; a power car at either end and an instrumentation coach in the middle. Using vehicles to inspect the track means that hundreds of miles of track can be inspected each night.

Finding the defects is only part of the problem. Imagine inspection trains working at night in the pouring rain at speeds of up to 50 mph. As the measurements are made they are tagged with railway mileage and a position from the satellite navigation systems. Reporting a defect is only any use if the Network Rail maintenance teams can be told exactly where the defect was found so they can return to the same point and replace the damaged rail.

To do this data from each vehicle is transmitted via wireless Internet to Sperry’s offices in Derby where it is analysed. Lists of suspected defect sites are transmitted to Network Rail maintenance staff via the Internet. All data is tagged with both railway mileage and satellite location.

The maintenance teams returned to the site of the suspect defect with a hand held satellite navigation location device and confirm the presence of a defect using a Sperry Walking Stick, which has exactly the same probe arrangement, calibrated to the same standards, as the vehicles. Depending upon the severity of the defect Network Rail then decides how to deal with the defect, either by reducing the speed of the trains or immediately closing the line until the rail can be replaced.