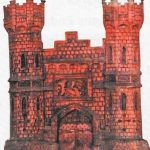 As the Village name suggests, there is, indeed, a castle at the centre of the village, but there is not just one, but possibly three castles in the vicinity, as listed by Historic England. To demonstrate ‘authenticity’, most of the information in this article is courtesy of Historic England and the maps of the Ordnance Survey. LIDAR (aerial scanning) information from a recent South Downs project is also available to substantiate this article.

The actual, most obvious ‘Rowlands Castle’ lies in the grounds of the private property, Deer Leap, adjacent to The Green in the centre of the Village. It lies on private property, so there is no public right of access. The railway line, built in the 1860s, cuts across the eastern border of the castle mound.

A recent project carried out by the South Downs National Park, in which local resident Mark Seaman participated, provides clear illustrations of the form of these castles. The LIDAR surveys also showed extensive medieval field systems, preserved by the ubiquitous forests.

Motte castles are medieval fortifications introduced into Britain by the Normans. They comprised a large conical mound of earth or rubble, the motte, surmounted by a palisade and a stone or timber tower. In a majority of examples an embanked enclosure containing additional buildings, the bailey, adjoined the motte. Motte castles and motte-and-bai1ey castles acted as garrison forts during offensive military operations, as strongholds, and, in many cases, as aristocratic residences and as centres of local or royal administration. Built in towns, villages and open countryside, motte castles generally occupied strategic positions dominating their immediate locality and, as a result, are the most visually impressive monuments of the early post-Conquest period surviving in the modern landscape. Over 600 motte castles and motte-and-bailey castles are recorded nationally, with examples known from most regions. Some 100-150 examples do not have baileys and are classified as motte castles. As one of a restricted range of recognised early post-Conquest monuments, they are particularly important for the study of Norman Britain and the development of the feudal system. Although many were occupied for only a short period of time, motte castles continued to be built and occupied from the 11th to the 13th centuries, after which they were superseded by other types of castle.

The motte castle at Motley Copse survives well, despite some disturbance caused by later quarrying. It can be expected to retain important archaeological remains and environmental evidence relating to the original construction of the monument and its later use. It forms part of a group of three or four well preserved mottes and ringworks, including Rowlands Castle to the south east, which lie in close proximity within the boundaries of the medieval forest of Bere and for which documentary evidence survives of an historical association with Robert, Earl of Arundel.

The South Downs National Park LIDAR survey, in which local resident Mark Seaman was involved, shows clear images of the related surface features, with the ringwork and bailey lying just to the west of a small oilfield.

The monument includes a small motte, probably dating to the 11th or 12th century, situated on level ground within Motley Copse near Rowlands Castle. It includes a roughly circular inner platform, 12m in diameter, enclosed by a flat topped earthen bank, 8m wide and up to 0.8m high, and an outer ditch, 9m wide and 0.5m deep. The inner platform is elevated up to 1.3m above the surrounding woodland, with no trace of internal features. A possible original entrance is indicated by a slight lowering of the bank on the northern side and a causeway, 7m wide, across the outer ditch. To the south east, the ditch has been widened away from the motte, possibly as a result of later quarrying, to form a shallow pond, up to 2m deep and 12m across. Although undated, the motte is probably broadly contemporary with a larger ringwork and bailey situated 200m to the north east, which is the subject of a separate scheduling. Both of these monuments fall within the boundaries of the medieval royal hunting forest of Bere and form part of the Hundred of Finchdean owned by Robert, Earl of Arundel. The motte may therefore represent a small siege castle erected against the ringwork and bailey by Henry I before he banished Robert of Arundel from the kingdom in 1101. The modern fence posts which cross the monument are excluded from the scheduling, although the ground beneath them is included.

The photo of a ‘symbolic castle’ used at the top of this article, is a copy of an ornamental brickwork display from the Brickwork Display House, part of the brickworks adjacent to the Dear Leap castle. The Brickworks were closed in the 1960s and was replaced by a builders yard and only recently redeveloped as a residential estate known as The Glade.

The original Brickwork Display House was subsequently carefully deconstructed and moved to the Bursledon Brickworks, where it has remained palletised, but the symbolic castle is on display on its own in the museum.