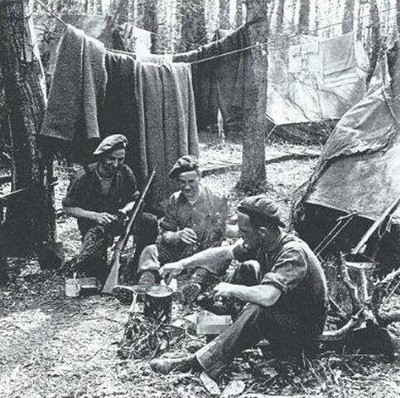 Sonia Teale, from the Rowlands Castle Historical Society, has collected some audio memories from village residents about the run up to D-Day and its impact on the village. You can listen to or read these memories.

Rowlands Castle was a key location because of its railway station and sidings, and its closeness to Portsmouth. The wooded countryside was ideal for hiding troops and machines from enemy spotter planes.

All the roads were used for parking camouflaged tanks, lorries and other equipment. The woods were hiding thousands of men, all their camp equipment, including kitchens and even a cinema.

Railways played a big part in moving men and machines. Rowlands Castle was one of only a few de-training stations in the South, and the only one East of the main A3 trunk road to Portsmouth.

In 1944 at the height of the Second World War, the station at Rowlands Castle was chosen as one of the de-training station for allied troops, who camped in nearby forests, in preparation for the D-Day landings in Normandy.   Troops would arrive from all parts of the country, de-train and  move into camps in lorry convoys. A ten mile deep restricted civilian movement zone was enforced all along the south coast of England and the troop camps were sealed off.  Blackout restrictions applied and petrol / food rationing was at its height.

“We were told to entrain that night, we were going south. After a long journey, during which we had to get across London, we caught another train and on we went. We stoped at last and got out at this little station. I looked around and l saw I was in a place known to me.  I thought it wasn’t long ago I was coming here for days out.”

“Everything was TOP SECRET. Nobody knew when “D-Day” would be, and people were not allowed to travel into or out of a ten-mile wide strip all along the coast. Near the end of May all military camps were sealed – no one in no one out!”

“The people of Rowlands Castle were tremendous; we were welcomed on all sides and although they must have suspected something momentous was going to happen not a word was breathed outside the village.”

“My memories of D-Day started, most probably in March (1944) when all the roads had yellow lines and a number in the corner of each oblong and this was for the vehicles to come into and we woke up one morning to find all these parking spaces taken and they started with the lighter trucks like half trucks and then gradually they moved on and heavier vehicles came in and it ended up with “Matadors”, these are big army lorries that carry big guns and they broke all the pavements up.” Robert Farr

“The soft verges along The Green and the paths through Stansted Forest were laid with brick rubble, we thought from Portsmouth, and yellow markings appeared on the roads. These boxes were soon filled with vehicles of all types.”

“It didn’t do Redhill Road any good and l can remember heavy lorries and guns sunk up to their axles. All this activity was leading up to D- Day of course and as the troops moved on they often threw their money for us kids to pick up.”  Robert Farr

“When D-Day arrived on June 6th 1944 local people had no idea. All the men and equipment disappeared over night.”

“I remember very plainly that as we woke on the 6th and they were gone, the few left made no secret of where and we knew well before the announcement on the radio that the invasion had started.”  Robert Farr

“I remember the small of bacon wafting across the road at breakfast time from the field kitchens in the forest.”

“There were tanks lined up along Finchdean Road, one side in the ditch so they didn’t block the road.”