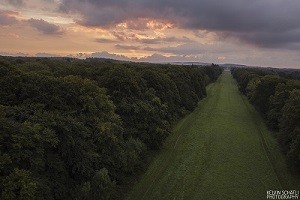 One notable feature of the Rowlands Castle area is the existence of three large country estates – Stansted, Idsworth and Staunton – each with its own interesting history. This article focuses on the distinct features of each land estate and the history of the houses is described in Large Houses. 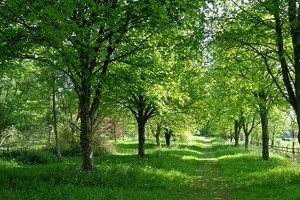 The history of Stansted – both parkland and woodland – shows that it is now a remnant of the most westerly part of the ancient forest of Arundel, attached to a hunting lodge probably built for Roger de Montgomery, first Earl of Arundel during the 11th Century (a supporter of William the Conqueror). 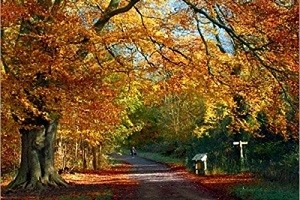 This picture shows The Avenue, leading from Rowlands Castle up to Stansted House.

Records of forest cover suggest pre-Domesday and the majority of the woodland is therefore designated as PAWS (Plantations on Ancient Woodland Sites) and ASNW (Ancient Semi-Natural Woodland). Landscape plantings were mostly carried out from the late 17th century onwards. Prior to this, the predominant woodland cover is believed to have been oak. Beech was introduced later as a landscape tree, singularly, in avenues and clumps for landscape enhancement and later in commercial forestry plantings. The forest formed part of a large parkland landscape. Subsequent owners have either added to or removed features from this landscape.

From the early 1950’s to the late 70’s mixed and pure commercial plantings were established in the areas of low standing timber volume or low value scrub as part of the national drive to create a strategic timber reserve. New plantings of predominantly broadleaves have taken place since 1990 mostly in response to the damage caused by the storms of 1987 and 1990.

The woodlands totalling 480.55ha, (1187.46ac) are now split between broadleaves (49.74%), commercial, predominantly conifer plantations (23.83%) and coppice (21.96%), predominantly chestnut but with substantial areas of hazel. The majority of the woodland is growing on a slightly infertile, acid sandy clay with flints over the Upper Chalk but in the south, the woods lie over the Reading Beds, a complex mixture of mottled clays and sands. The woodlands are very varied, often within individual compartments and this is being further enhanced with some early experiments at converting suitable areas to CCF (Continuous Cover Forestry) where it is thought desirable, achievable and sufficient natural regeneration occurs.

The main broadleaved species are pedunculate oak, beech, sweet chestnut, ash, sycamore and birch with smaller numbers of field maple, whitebeam, rowan, aspen, and cherry. There are large numbers of Turkey oak in the park and this species has spread into many of the woodland areas. The main conifer species are Douglas fir, Japanese larch and Scots pine with smaller volumes of Norway spruce, western red cedar and Corsican pine. Large yews are scattered throughout the majority of the woods and especially along the escarpment. A full range of woodland products are marketed from quality hardwood and softwood saw logs, cleft chestnut stakes and rails to firewood. There is a network of tracks and paths, which give approximately 20 miles of permitted routes in addition to 12.3 miles of public rights of way. This provides a major recreational opportunity, attracting in the region of 100,000 visits annually. The ongoing management aims to create and maintain a diverse forest producing much needed timber for the Nation’s economy whilst retaining its importance for biodiversity, landscape and public access where appropriate.

The forest is at present being severely impacted by ash dieback disease and regrettably large numbers of this iconic species are being felled for safety reasons. This has affected the estate’s long-term forest plan, with a large replanting commitment not originally planned for. Replanting will consist of predominantly native broadleaves but will include some from seed sources a few degrees south to potentially mitigate against climate change and a number of more ornamental species to add interest and diversity to the forest and to assess their potential use as timber species in the future. 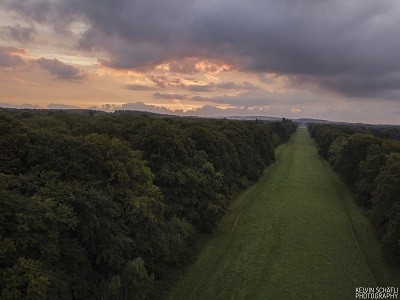 Over the last twenty-five years, considerable investment has gone into the restoration of aspects of the Grade 2* Historic Park informed by two parkland surveys and part funded by grant-aid from Natural England. This has focussed on the opening of vistas, removal of unwanted features, tree planting and returning the farmland around the mansion to permanent grass under non-intensive management. This grassland is managed in-house with a grazing tenant and his popular herd of Highland cattle. The remaining balance of farmland, mostly arable is on long-term lets to tenant farmers, mostly producing combinable crops such as wheat, oilseed rape and barley.

The woodlands and park are rich in wildlife, with a wealth of veteran trees scattered throughout. Decaying wood habitat is a major feature and supports many specialist insects such as the tanner beetle and a host of fungi which includes several red data book species, some nationally rare. Plant-life is diverse and abundant with six species of orchid that occur in the woodlands out of twelve found across the estate. Moths and butterflies are well represented with the scarce mervielle du jour and purple emperor being notable species. The secretive and fascinating nightjar breeds when suitable large open areas are created by coppicing or clear-cutting. Most gratifying of all has been the return of barn owls to breed in the park after an absence of over thirty years and the successful reintroduction of pearl-bordered fritillary butterfly since it disappeared in the late 1990’s.

The Woods and Park Department staff comprise a working Head Forester, one full time Forester and two contractors when finances allow. Most tasks are carried out in-house, but other specialist contractors are now used for tree surgery work, large planting and spraying operations and the larger timber harvesting operations. The department also manages a small syndicate fishery and carries out the squirrel and deer control across the estate.

Editorial: Michael Prior is the Head Forester for the Stansted Park Estates. In normal times, he leads informative walks across the Estates which are well attended by members of ‘The Friends of Stansted’. 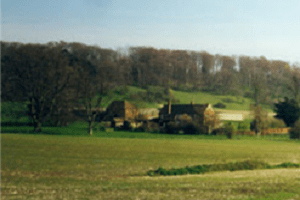 Travel along the lower Chalton road and Old Idsworth Gardens are on the right, which was the site of the first Idsworth House.

The original Old Idsworth House and gardens were constructed in the mid-16th century. In 1725 the tree lined avenues were planted and by 1830 the parkland contained various tree species. The house was largely demolished in the mid-19th century.

West of the Old Idsworth House, leading up the Down, was a lime avenue and a walks area. A dovecote, stone-lined pond and two icehouses supplied the household. By the 1830s the parkland was ornamented by clumps, with acacias and a beloved Red Cedar near the house. The farmhouse and its immediate grounds are now a private home, Old Idsworth Gardens, containing the pond, one of the icehouses, the walled garden, donkey well and dovecote. The parkland is divided between surrounding farms.

Old Idsworth Park and Gardens are situated on the Hampshire/Sussex border. What remains of the old house – the coach house, stables, walled garden and out-buildings (including a dovecote, well-house, game cellar and ice house) are on rising ground just above the valley floor where the main line railway, the road from Chalton to Finchdean and on occasions the Lavant winterbourne stream runs.

The valley runs north/south, with very steeply rising sides, up to around 100 metres, to both the east and west. To the east, the skyline of the valley side is dominated by a thick band of woodland, composed mainly of beech, yew and conifer of varying ages, including recent replants. The west slope is predominately in arable production.

There are the remnants of an impressive lime avenue which once dominated the hillside opposite Old Idsworth. Only 33 mature limes are still standing, from what would have been an avenue of around 200 trees planted in two double rows 40 metres apart and staggered within the double rows at six metre centres. The rest of the original trees are stumps or missing. The land between the rows of trees is being used as pony paddocks.

North of Old Idsworth Gardens, on the top of a hill, is the little chapel of St Hubert’s, which is thought to have originated as a hunting chapel. It is visually separated from what was probably the old manor house by extensive arable cultivation.

There are remnants of parkland trees (a mixture of lime, cedar, yew, beech and maple) in the pasture (now mainly pony paddocks) surrounding Idsworth Gardens. Below the buildings, to the east, is disturbed ground where the original house stood, a section of the flint wall ha-ha to the south is all that is visible. Little remains of the parkland to the south except some scattered beech and oak and one clump of scrub and trees in an arable rotation. The trees have gradually been lost through old age, storm damage and general decline due to farming operations. 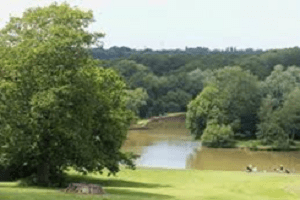 The first gardens on the site were begun by William Garrett who purchased the land in 1802. The park was purchased in 1820 by Regency politician and botanist Sir George Thomas Staunton as part of his country estate ‘Leigh Park’. He made significant changes and additions to the gardens with the construction of the lake and a number of follies. On his death in 1859 the estate and gardens were inherited by Staunton’s cousin Henry Cormick Lynch. Henry Lynch died just six weeks after receiving his inheritance and it was in turn passed to his eldest son George Staunton Lynch. In 1861 he in turn sold the gardens and the estate to William Henry Stone for £60,000. Stone had a new house built, Leigh Park House, which was finished in 1865 and most of the old house was demolished around the same time.

Leigh Water is home to a number of islands, the largest of which was home to a cottage while a smaller island named Fort Island was originally home to small battery set up for nine guns. The cottage was used to house the under-gardener whose job it was to look after the lake area. A third island was Swan Island which as its name suggests was used to house swans. Under Henry Stone the lake was expanded and an extra island added. Most of the surrounding buildings were removed at this point with some being replaced by new structures. The Chinese bridge remained but alterations were made to its appearance.

Editorial: the above text is from ‘Leigh Park a 19th Century Pleasure Ground’ by Derek Gladwyn