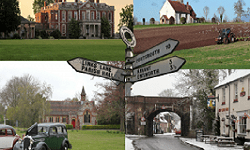 This article describes the archive and artefacts that are in the ‘ownership’ of the Heritage Centre. But this ‘virtual or online museum’ also offers contacts with other organisations, museums and individual residents who have collected or written about the Village and its surrounding area. In this sense, it is the intention that the website or museum should be a ‘one-stop shop’ or way to explore other sources of information about the Rowlands Castle area and its community.

There were several ideas that were brought together when forming the Rowlands Castle Heritage Centre. The trigger was the offer for the purchase of a model railway of the Village during preparations for the Normandy Landings (in mid-1944). We are proud that the model railway has become our main and iconic ‘artefact’.

Other residents also interested in establishing a ‘museum’ were holding archive materials, gathered during the drafting of a Parish Plan and the Local Landscape Character Assessment. Still more residents had, out of personal interest, already gathered and were holding a considerable number of photos and wide-ranging information about the village. The willing contribution of some of these residents has been acknowledged and they have been described as ‘Local Historians’.

The challenge and time to find a building to display and house both the model railway and archive has created a hiatus in the overall progress of the ‘Museum’.

The RCHC website has, however, now become the window of the museum, where the model railway can also be viewed. It publicises our past activities in the community (including invitations to assist with original funding for purchase of the model railway), as well as future plans. Due to the lack of a physical museum, no effort has yet been made to attract other artefacts, nor to proceed towards formal ‘accreditation’ as a museum.

Still under development, the current Heritage Centre Archive is held in boxes and files awaiting formal archiving and display in an actual museum. Much of its content, however, is being progressively presented on this website.

The RCHC archive is complemented by documents formally held elsewhere in the Village including those of the Parish Council – the main statutory and community-wide organisation for this area. Some other archives are progressively being filed with the Hampshire County Council Records Office (HCC), or Hampshire Archives Trust (formerly hosted by HCC). Other significant village organisations hold their own archives, including St Johns’ School, the Rowlands Castle Association (RCA) and the Rowlands Castle Golf Club.

Importantly, the RCA holds copies of the village Magazines that it has published three times a year since 1982. The Magazine has recently been retitled ‘Village & Valley’ – a more concise way of describing the overall community. The Magazine provides a regular, ongoing insight into the community and its activities with articles and reports from local councillors and officers of clubs and societies. More recent issues are now made available on the RCA website. The Golf Club, for its part, has its own volunteer archivist.

Please also refer to the website of The Spring Arts & Heritage Centre, Havant to visit their archive of local history booklets about Rowlands Castle.

Slightly further away, The D-Day Museum in Southsea is the national museum for World War II, particularly relevant to our model railway. Portsmouth City Museum holds maps and paintings including some by a nineteenth century painter who lived in the village – Charles Cotton. For some of his paintings, annotations by Cotton described his subject matter – helpful in the age before the camera. The Hampshire County Council Records Office and newly independent Hampshire Archives Trust, both referred to above, are based in Winchester.