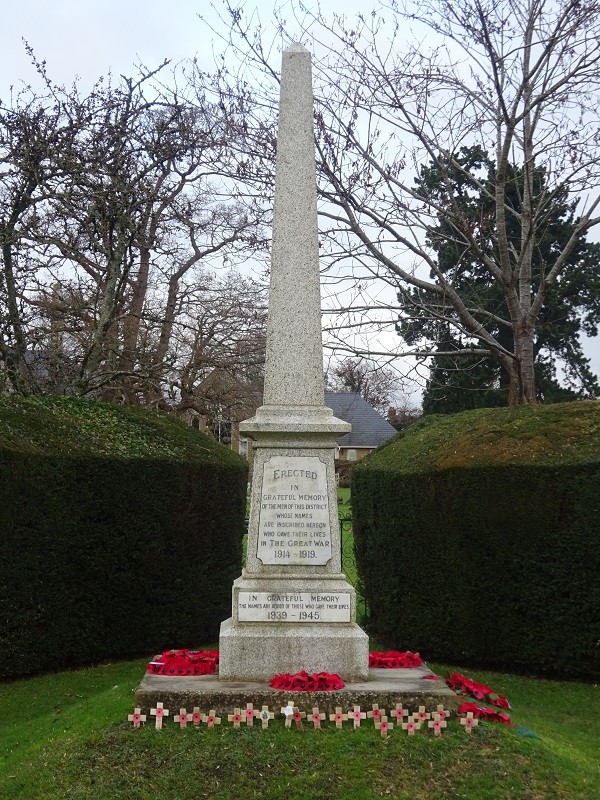 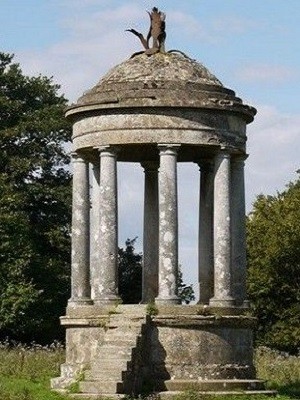 The first main achievement of the Heritage Centre was to purchase and display locally the iconic Model Railway constructed by Peter Goss. The model depicts the village at a time during World War II when troops were assembling prior to their departure for the Normandy Landings, which heralded the beginning of the end of the war.

There are memorials to both World Wars in the village and a mosaic celebrating the Queen’s 60th Jubilee. This page also contains details of other types of memorials and also the follies on the Staunton Estate. 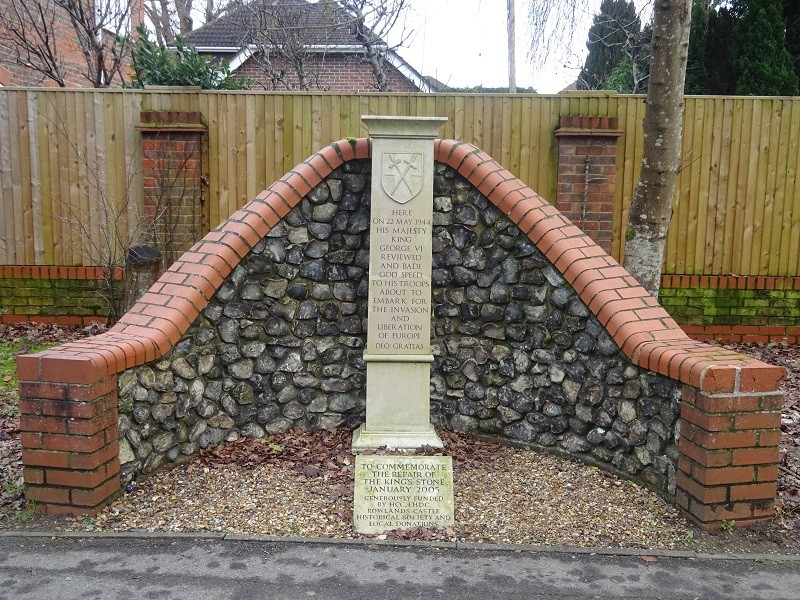 Due to the presence of troops in Rowland’s Castle during World War II, King George VI, as part of his major tour-de-force inspection in the Portsmouth area, reviewed and took the salute from a number of troops in Manor Lodge Road, which has subsequently been celebrated by the modest monument called the King’s Stone.

There is a shield on the stone monument above the inscription ‘Here on 22nd May 1944 His Majesty King George VI reviewed and bade God speed to his troops, about to embark for the invasion and liberation of Europe – Deo Gratias’.

In January 2005, repairs were carried out on the stone, a wall built to frame it. A plaque was added in front of the stone, commemorating the repair, which was funded by Hampshire County Council, East Hants District Council, Rowlands Castle Historical Society and local donations. 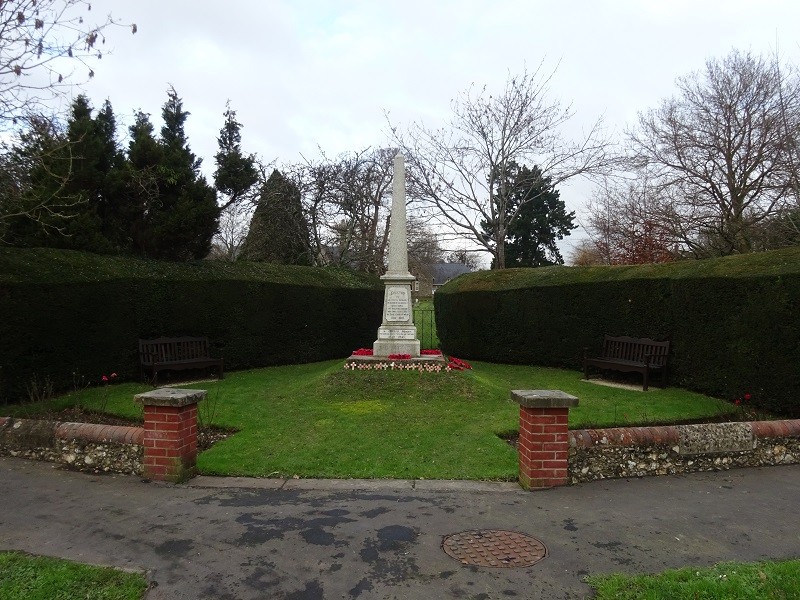 The Village War Memorial provides a record of the fallen from the two World Wars. It was dedicated on 2nd November 1919 and the inscription reads ‘Erected in grateful memory of the men of this district whose names are inscribed hereon who gave their lives in the Great War 1914-1919’. Then after World War II, this was added ‘In grateful memory, the names are added of those who gave their lives 1939-1945’.

During the second World War II, Rowlands Castle was an important site, being close to embarkation points for the cross-channel crossing to France. There were railway sidings which allowed soldiers and tanks to detrain and then take cover in the extensive forests of the Stansted Estate. The troops were assembling prior to their departure for the Normandy Landings. This website has a series of video clips and photographs which illustrate and interpret the Model Railway which depicts the village at that time. 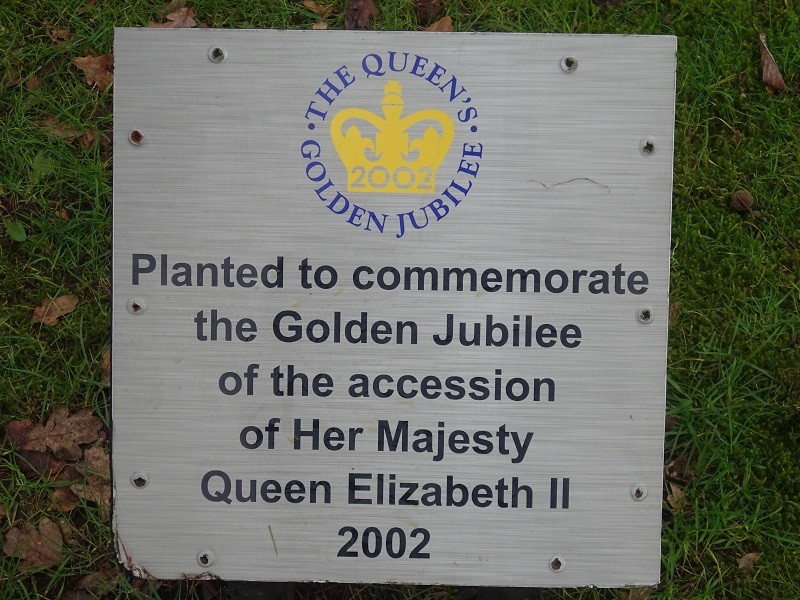 In 2002, a tree was planted on the south side of The Green, to commemorate the Golden Jubilee 0f Queen Elizabeth II. 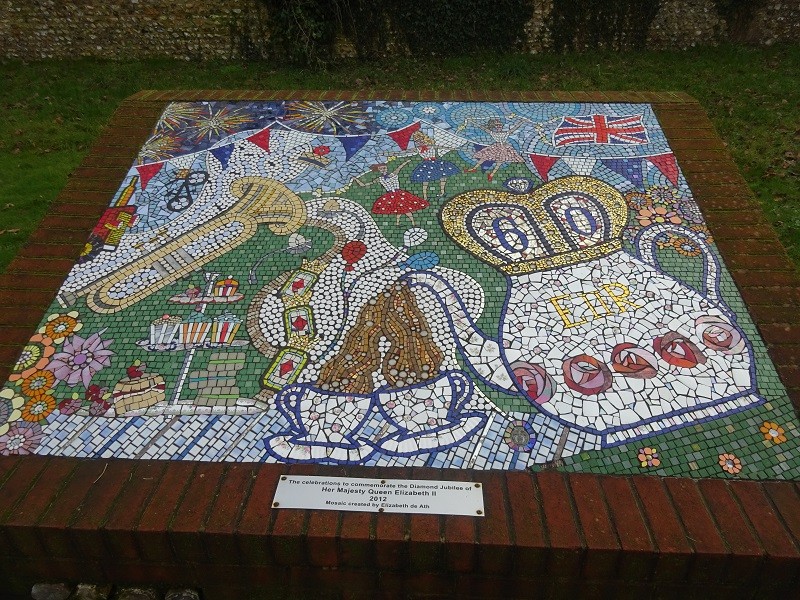 Situated on the south side of The Green, this mosaic was created by Elizabeth de Ath to celebrate the Queen’s Diamond Jubilee in 2012. Street parties were held across the country and Rowlands Castle’s residents joined in enthusiastically. The RCA Magazine Summer 2012 and a resident’s contribution contain wonderful photographs of the day’s celebrations.

Following the very successful celebrations of the Queen’s Diamond Jubilee, the organising committee decided to raise funds to create a permanent commemoration of the day in the village. The resulting memorial was the Diamond Jubilee Mosaic designed by Elizabeth de Ath who lives and works in Hove. 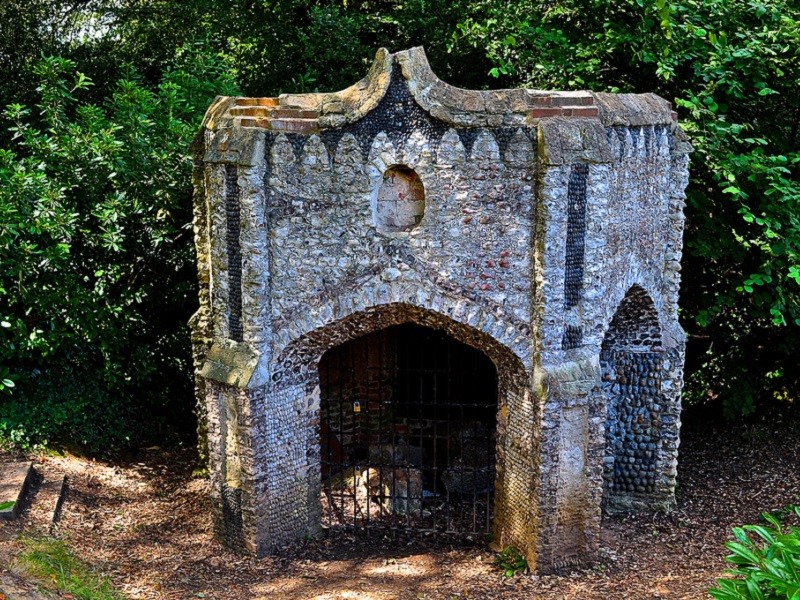 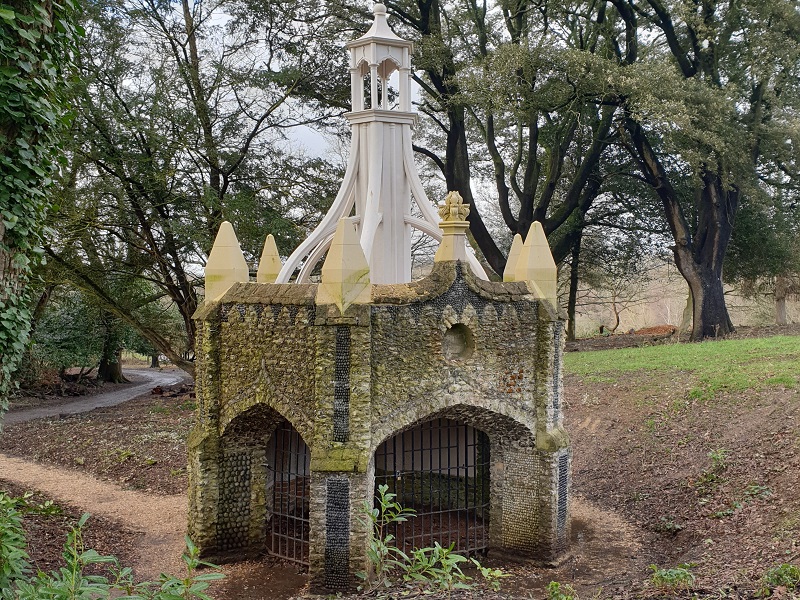 The Shell House was built in 1828 and is covered in shells from Hayling Island. The house is hexagonal in shape and was based on the design of the Chichester Cross. By 1836 George Staunton was using the Shell House as a museum of curiosities for such items as a stuffed crocodile and examples of Roman pottery. This structure is a Grade II* listed building and it now holds a number of plaques commemorating Staunton’s ancestors. As part of renovation works funded by the Lottery Fund, the Shell House was restored to its former glory in 2020. The photos above show it before and after restoration. Post-restoration photo by Teresa Benger. 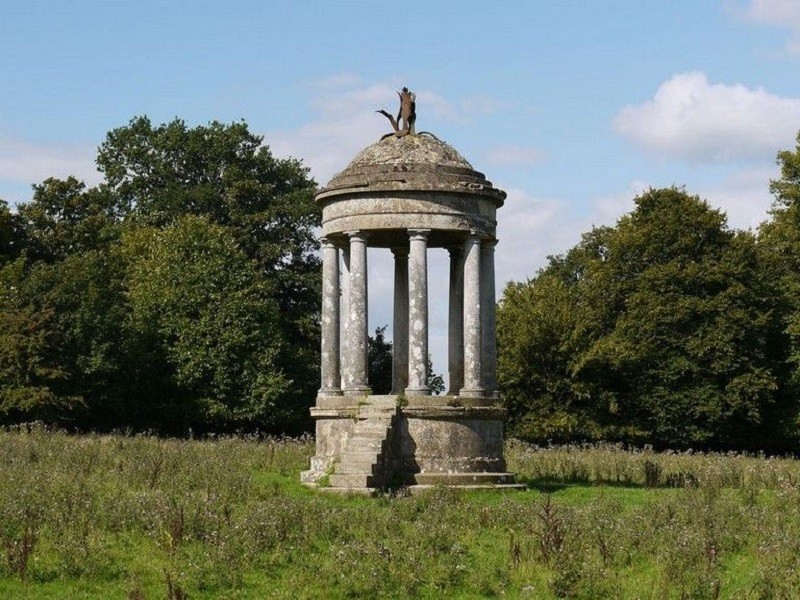 The beacon is a folly built in 1830 in the style of an ionic temple to a design by Lewis Vulliamy. It was largely built with material from the demolished Purbrook House. The roof is domed and supported by eight Doric columns. The roof has a hole designed to allow a flagpole to be placed there. It is believed that a Union Flag was hoisted on top of the Beacon to signal to Staunton when the lord of the manor was in residence.

It was in 1849 when the British Post Office first encouraged people to install a letter box to facilitate the delivery of mail. Before then, letterboxes of a similar design had been installed in the doors and walls of post offices for people to drop off outgoing mail. Examples of such a wall box are those pictured above in Redhill Road, Finchdean Road and Links Lane, respectively. These older wall boxes are inscribed with the monarch of the time, George V (1910 – 1936) and George VI (1936 – 1952).

Free-standing pillar boxes (such as the one shown on The Green) have been in use since 1852, just twelve years after the introduction of the first adhesive postage stamps (Penny Black) and uniform penny post.  According to the Letter Box Study Group, there are more than 150 recognised designs and varieties of pillar boxes and wall boxes, not all of which have known surviving examples. The red post box is regarded as a British cultural icon. Royal Mail estimates there are over 100,000 post boxes in the United Kingdom.

In 1994, as part of Hampshire County Council’s Hampshire Villages Initiative (HVI), Rowlands Castle was provided with funds to enhance the village gateway name signage and to provide some cast iron seats and bins on The Green. The HVI sought to add value by working in partnership with those communities which would benefit by having additional funds to ensure that their proposed improvements would reflect the unique sense of place of Hampshire’s villages.