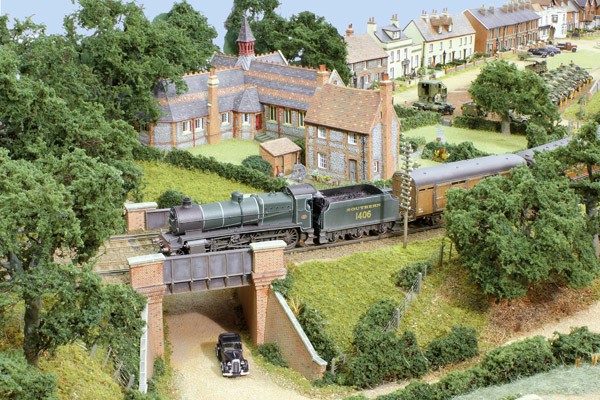 “ The Model Railway – which we regard as a ‘historic time capsule’ – is our principal artefact. The offer by Peter Goss to sell it to the Village where it had already been demonstrated twice before, was the stimulus for the creation of the Rowlands Castle Heritage Centre, its registration as a charity, and then development of a website to become a ‘virtual museum’.

“Please press ‘Play’ to start the videos, then press the square in the bottom right hand corner of each video to display it in full screen. Once the video is complete, Press Esc, to return to this page.”

The first video, by TV Solent, records the model’s return to the Village, and introduces Peter Goss who describes the model and how he came to choose Rowlands Castle – its railway, Green and buildings – as its setting.

The second video displays the rolling stock in motion accompanied by songs of the WWII era, at a time when it was on display in Liverpool in April 2014, while the third video shows still photos of the troops, Village buildings – houses and railway station – all accompanied by a sound track that places the D-Day period in its historic context. The fourth video, copyright Highlandman Video and linked from Rowlands Castle Historical Society website, shows the model railway at the Basingstoke Model Railway Exhibition on 13th March 2011.

More information about Peter Goss and the other model railways that he has built can be found on Peter Goss’ website.

‘Local Historian’ Paul Marshman has written an illustrated booklet, which is published by The Spring Arts and Heritage Centre, a museum in nearby Havant Borough, which describes the model railway in more detail. Paul Marshman assisted Peter Goss with photographs when he was designing and building his model and subsequently displaying the model in Rowlands Castle, long before it was offered back to the Village.

The model railway depicts the centre of Rowlands Castle – The Green and the Railway Station – as is it appeared during preparations for the D-Day Landings in 1944. Rowlands Castle and Stansted were one of five key assembly areas for troops in Hampshire, prior to the Normandy invasion in June 1944. This location used the railway sidings as access for transport and the surrounding woodlands for as cover for the troops.

The following photos of the model railway are provided courtesy of Steve Flint, Railway Modeller.

A large village green is situated east to west and the railway crosses it at the eastern end, running north to south on a severe curve.  The model required adaptation of reality and has been designed to run parallel tracks along side the green and return to the north end of the station to achieve a viable layout. The bridge to the south of the green adjacent to the Church on the Green is based on the actual bridge across the Finchdean Road to the north of Rowlands Castle.

In 1944 at the height of the Second World War, the station at Rowlands Castle was chosen as one of the de-training station for allied troops, who camped in nearby forests, in preparation for the D-Day landings in Normandy.   Troops would arrive from all parts of the County de-train and in lorry convoys move into camps. A ten mile deep restricted civilian movement zone was enforced all along the south coast of England and the troop camps were sealed off. Blackout restriction applied and petrol / food rationing was at its height.

The model buildings are all based on actual buildings that existed in 1944, many of which still do. They include the station, a church, three public houses and several private properties. The finished colouring of the buildings and landscape are based on colour photographs taken from a US serviceman’s record taken in 1944, which possibly are the first colour pictures of Great Britain ever taken.  A second source of information was a book “ Yesterday’s Country Village Life from 1900 – 1960 “ Henry Buckton ISBN: 9780715328811 , which proved very useful.

Train compositions and military units are all based on historical and first hand written and verbal accounts, where ever possible and hopefully reflect the atmosphere of a very difficult period in British history.

The model layout is 16ft 6ins ( 5029mm ) long and 11ft 6ins ( 3505mm ) wide, including the operating and storage sidings. It can be viewed on two adjacent sides, the right hand corner containing the station area and double arched bridge over the Finchdean Road.

Kent Panel Controls supplied all the electrical components and include three separate locomotive controllers serving the up line, down line and the station yard. The control panel is located at the station end of the storage yard. The up and down lines are physically and electrically totally separate.

In 1944 Rowlands Castle was chosen as one of many infantry ‘de-training’ stations in the south coastal area from which troops were transported by lorry into local camps in preparation for the Normandy landings. Elements of the British 3rd Infantry Division were in this area and some are modelled at the station and in the forest camp nearby. (1st Battalion King’s Own Scottish Borderers) and a troop of armoured self propelled guns (Priests) are shown near the railway bridge moving towards Gosport. (76th Field Regiment).

The village green was covered in brick rubble sent up from Portsmouth and is known to have been used by army engineers as a tank repair depot. Their repair vehicles are shown together with three troops of Sherman tanks getting ready to drive the last 8 miles or so to the landing craft at Gosport. (3rd County London Yeomanry, 4th Independent Armoured Brigade).

Full blackout regulations are still in force and concrete pillboxes, removed road signs and station name boards with names painted out remain from an earlier part of the war when England was under threat during the ‘Battle of Britain’.  Home defences were prepared to receive an invader. Rowlands Castle was a key location because of the railway station and sidings, and its closeness to Portsmouth. Also the wooded countryside was ideal for hiding troops and machines from enemy spotter planes. All the roads were used for parking camouflaged tanks, lorries and other equipment. The woods were hiding thousands of men and all the camp equipment, including kitchens and even a cinema. Railways played a big part in moving men and machines Rowlands Castle was one of only a few de-training stations in the South, and the only one East of the main A3 trunk road to Portsmouth.

The model buildings are all scratch built to a scale of 1 in 76 (4mm to the foot) and are based on the real buildings at Rowlands Castle. They are constructed from mount board card with overlays of embossed plastic brick, ‘N’ gauge ballast for flint or paint and talcum powder for render effect. Roof tiles are embossed plastic slate or cut card strips for plain tiles. Painting has been carried out using Humbrol enamels.

Locomotive types are all based on either first hand accounts from the time or documented information and are Southern Railway, Great Western Railway and War Department owned. Loco numbers may vary but most are based on those stabled at engine sheds locally. Most locomotives would have been painted plain black by this stage of the war. Coaches and locomotives are modified ‘ready to run’ items. Wagons are either ‘ready to run’, kit built or scratch built.

Trackwork is OO Gauge SMP on the scenic section and PECO Code 75 round the back. Third rail is PECO Code 65 soldered to small copper coated dome head nails

The white stars on the military vehicles denote vehicles belonging to the Allied Army of Britain, America and the Commonwealth combined – Skytrex transfers.